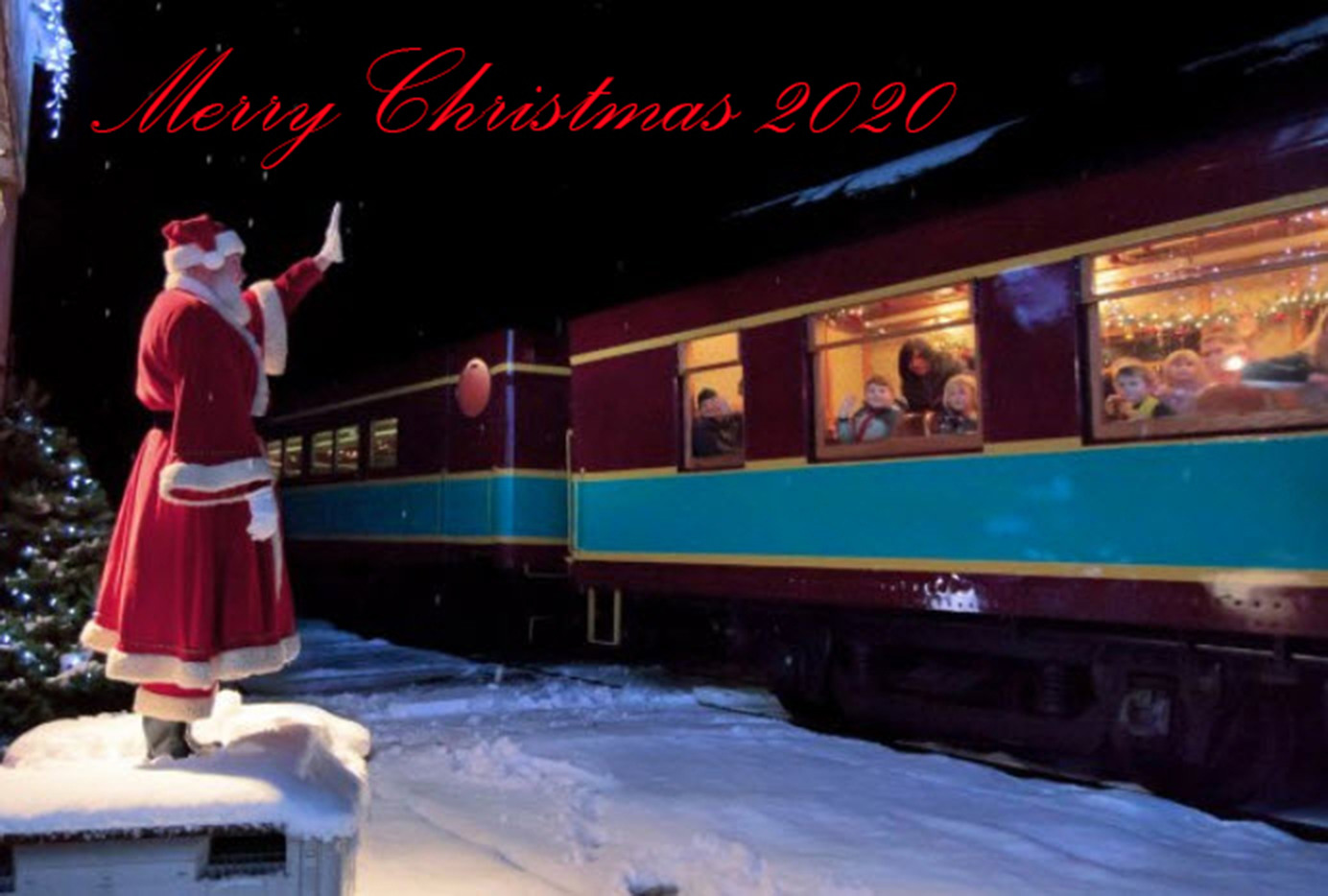 2020 is finally coming to a close.  It’s been quite a year, hasn’t it?  In a small way, however, the holiday season helps reduce the disappointment of not conducting our layout tour, not displaying the Lionel Project Railroad at the Jubilee of Trees, and not gathering for our Christmas party.  But like Tampa Bay Rays fans muttered after the World Series, there’s always next year.  The same is true for the Color Country Model Railroad Club and the activities we thoroughly enjoy like the Annual BBQ, G Scale Group Meets, Friday Lunches, and regularly visiting each other’s railroads.  By staying safe and healthy, all these things will return next year right where we left them.

And now, this month’s club news.

This past October, Dave Merrill introduced Al Thorne and Bob Mallory to Heather Madison, a mother of 2 young boys.  They met at her home and discussed the small 4' x 6' layout from which the Lionel 027 track had been previously removed.  Bob suggested a list of FasTrack pieces she needed.  About a week later, Dan Mangiaracina and Bob installed the switches and track to complete the layout.  Click HERE to see a video of the layout and the kids’ reactions to running trains.

New images of the Lionel Project can be found HERE.  Scroll down to the December 2020 Update.

Larry and Peggy Schneider describe major modifications to their backyard, outdoor railroad, and their quick trip to Boulder City, Nevada.  “December WOW what a year it has been.  I’ve torn out several sections of track, obliterated the campground, and removed a building. We are removing a tree and 3 bushes to open things up a bit. I removed the bridge across the stream, fixed it and re-stained it.  Once the planting of 2 new trees is complete, I plan to rework some of the track, add a few feet to one of my inside loops, rebuild the campground in a new location, and maybe redo the western town design.  I also am continuing to modify my engines for Train Control using the Bluetooth control system.”  Click HERE and scroll down to the photos under December 2020 Update.

“Peggy and I had the opportunity to visit the train display in Boulder City and also ride the Rail Bikes.  The bikes were a hoot and a toot.  The ride was mostly downhill with very little peddling.  At the end of the ride, the train picked us up and also took the bikes back to the station.”  Click HERE for photos of their visit.

Since March, Dick and Laurie Saunders made various changes to the layout.  The coal mine was relocated to the left front of the layout to give it more prominence and the nearby tunnel was increased to accommodate two tracks.  Several smaller structures and figures were likewise relocated to better fit available spaces.  Click HERE and scroll down for new photos and videos under December 2020 Update.

Construction continues on Tim and Dana Fitch’s Southwestern High Frontier Railroad with the near completion of Crystal Mountain Mesa.  Installed in the mine is a smoke unit controlled remotely to simulate the aftermath of blasting.   As an added feature, Tim intends to include a subwoofer inside the mesa to simulate sounds of exploding dynamite.  (See the video labeled Blasting in the Mine where I added some temporary special effects until Tim's mesa is complete.  Make sure the volume is up.)  Installed in two cabooses are Bluetooth cameras linked to an automotive backup display monitor.  Also mounted in the tunnel are two cameras directed down mine shafts where Tim used On30 figures and hardware to achieve "forced perspective".  Click HERE and scroll down to the December 2020 Update for photos and videos of this impressive layout addition.

Keith and Mona Johnson’s update.  “I haven't made an awful lot of changes since the last update.  Just preparing some new stuff. Over the next 2-3 weeks, I'll be adding a lake (artificial, of course) to the layout.  I’ve also taken a 3D printing course at Dixie State University.  I am now designing buildings and building parts for printing. I have an outhouse, a shed, and a series of windows to incorporate in other buildings, all in various stages of completion.  I started out just printing a roof cap as I had to replace one on a building.  It all started from there.”

“I am also experimenting with adding sound to the layout.  Right now, the cows I have in the ranch are generating a bunch of mooing when the train passes.  It's working on my test bench; we'll see how it works in real life.  Guess that's all for now. I'll let you know when I complete several of these projects.”

In October, Bob Mallory led a work party of Dan Mangiaracina, Al Thorne, Jim Clark, and Byron Rasmussen to install two complete bus lines on Bryan Osborn’s huge layout.  Bryan helped out a lot and the final result was two tracks with constant voltage to enable Bryan to run his trains throughout his track layout without voltage drops anywhere.

Jim Clark’s layout and jigsaw puzzle collection was highlighted by the Southgate 2nd Ward.  Click the link to see still photos and video.

When Jim Harper starts building a structure, there’s no stopping him.  Click HERE and scroll to the bottom to see two photos of the nearly complete Colfax Station.

Rick Guercio added details to his track plan including locations of hoodoo’s, farm, Christmas village, and gravel pit.  (Members might recall these features from Rick’s previous layout.)  Click HERE and scroll to the second drawing.

All the way from Jefferson City, Missouri, Doug Whetstone updates us on his layout construction and other pursuits.  “Greetings gandy dancers from Jefferson City, MO. I trust all of you had a wonderful Thanksgiving holiday and maybe got to spend it with some family. Weather has been a bit unusual here in central Missouri. Cold one week and then in the 80’s the next, but I think winter has finally arrived. 33 degrees out today and a bit windy.”

“I’ve been fairly active the past several months. I continue to work on my layout – Ozark & Green Mountain Shortline. I have finished one staging peninsula and now working on the second one.” Click HERE for photos.

“December will be the 4th webcast for the Central Missouri Area (CMA), Mid Continent Region. We’ll be treated to a tour of the O Scale Glacier Line located in Marias Pass, Montana. This railroad has been featured on 2 professional videos and in 4 national publications. Hope you take the time to join us 12 Dec, 1000 hrs. I will send a link to Lloyd in a week with the link to the webcast.”

Hope this finds all of you well and in good spirits. Just think about all those poor people stuck indoors without a railroad to work on. Have a merry Christmas everyone and stay safe. I’ll see you next year. In the meantime, keep your hand on the throttle and your eyes on the rail.”

Werner Balsterholt found this one about a plumber who’s constructed an 1/8” scale railroad (7.5” gauge) complete with 680-foot trestle which took about three years to build. https://biggeekdad.com/2020/11/backyard-railroad/

This video from Jim Clark shows what happens when locomotives hit snow at high speed.  Click HERE to see.

In 2016, Doug Whetstone established the page to share information about past, current, upcoming activities and events with people having similar interests in railroad modeling around the world.  Current club members who also use Facebook are encouraged to follow the newly resurrected page to share their railroad modeling efforts photos, videos, and related activities. https://www.facebook.com/Color-Country-Model-Railroad-Club-543322675829441

Now, here’s my shameless plug to benefit the NMRA.  AmazonSmile is an Amazon initiative to benefit charitable organizations around the country.  Once you choose the NMRA, AmazonSmile will donate 0.5% of your eligible purchases to it.  See https://smile.amazon.com/ref=smi_se_saas_lsmi_smi for all the details.

Until January, Lee and I wish you a VERY MERRY CHRISTMAS and a much better New Year!! Stay safe and healthy everyone.