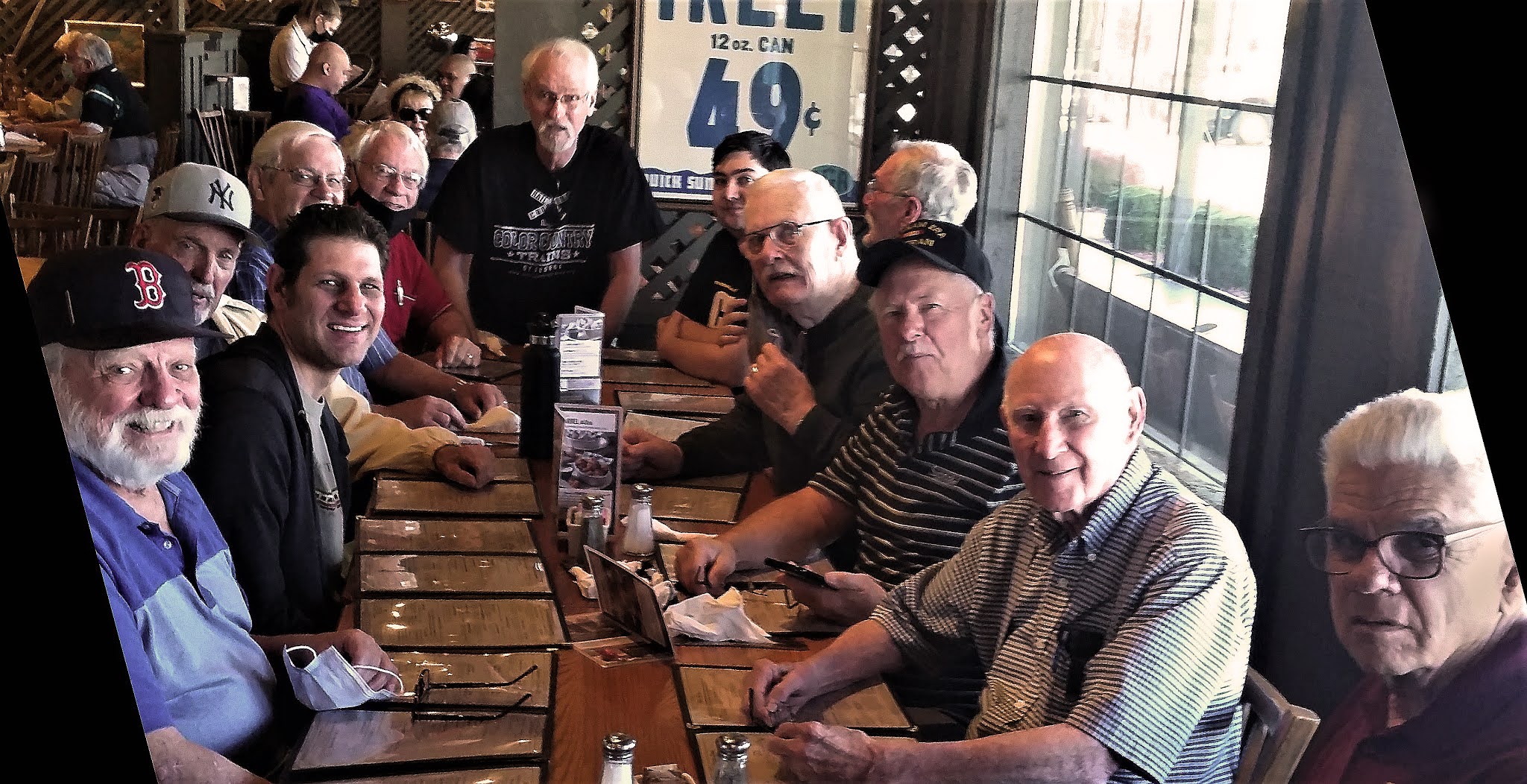 With the short-lived snow falling last month, it’s hard to imagine May is already upon us with warming weather (90º today) along with added opportunities to visit fellow club members and their railroads.  Speaking of which, railroads in Sun River will be open for a visit later this month.  See details below under Club Member Activities.

“Greetings.  On January 15th, 2020, I was greatly honored to be elected as the President of the Color Country Model Railroad Club; an organization of very special model railroad people.  The year has indeed been unusual and didn’t go as we originally thought it would go.  The Pandemic disrupted the whole year and prevented us from attending the usual activities we do every year such as the Kanab Train Show, the Hostlers Train Show, our Spring BBQ, our annual Layout Tour celebrating National Model Railroading month, Intermountain Health Care’s Jubilee of Trees, and our Christmas Party.

Prior to the nationwide lockdown on March 19, we were able to install the G-scale layout in the hospital’s Pediatric Center Playroom on February 25th.

With a military funeral conducted on July 29, 2020, we honored our dear friend Joe Zukowski who succumbed to serious health issues on June 18, 2020.  Joe was an honorable, long time club member always eager to help anyone with electrical and other layout challenges.  With hard work by Bruce Klawitter, Terry Schramm, Dave Merrill, Jr., and Lloyd Thomson, Joe's collection of train miscellaneous was gathered up, inventoried, and sold to a train collection company with the proceeds going to the Zukowski family.  Joe will be greatly missed.

I’m very happy to report we’re back at the Cracker Barrel for our regular Friday club luncheons at 11:30am as the photo above, taken on April 23rd shows.  Our annual Business Meeting will be slated soon to plan the club activities for the remainder of 2021.   Thanks to all of you for your support to the club.”

At lunch last Friday, Jack Douglas relayed a story to me you’ll find interesting.  He shares it with us here.  “Irv’ (Irvin R. Athearn) was an old-time friend of my dad’s and later a business associate.  My father started in the model hobby business in 1934 and I came along in 1940.  During the “war Years” he worked part time for the D&RG Western Railroad and ran his retail model and train shop before doing a stint in the Marine Corps towards the end of the war.

In 1956 ‘Irv’ hatched an idea and came to my father to help him.  It seemed the labor cost in the Los Angeles area, where Athearn was then doing his manufacturing, was eating him out of “house and home”.  Employment costs in Utah were much lower at the time and he talked my dad into the idea of assembling, packaging, and shipping his products from Salt Lake City rather than LA.  My father agreed with the idea and soon found a deserted former super market to rent at a very low cost for their operation.  Chairs for the work space were purchased as was used furniture from the local Mormon Church Desert Industries discount outlet and tables were made from 2X4’s and Masonite.  Young women were hired and taught the various jobs of the operation and I even went to work that summer putting roof walks on boxcars by the thousands for 25 cents per hour.  ‘Irv’ sent countless boxes containing hand rails in bulk, box car bodies and the like to Salt Lake. At home, my brother, sister, and I worked endless hours at the kitchen table putting the micro-springs in trucks with a No.11 Exacto knife, while we flipped them all over the room.

Thousands of ready-to-run train sets were shipped from that facility for the coming Christmas season.  After the holidays, work from the super market became too cumbersome and all assembly was moved back to Los Angeles.  That same building subsequently became an expanded DOUGLAS MODELS retail store and headquarters for the wholesale divisions in Salt City, Denver, and Seattle.  The Seattle operation closed in the 1980’s and the Denver wholesale warehouse moved to Salt Lake City in 1999.  GREAT MODELS, SPRUE BROTHERS and KITLINX internet outlets subsequently purchased DOUGLAS MODELS after my father’s death in 1998 and obviously the rest is history.

Today Athearn is headquartered in Champaign, Ill and is owned by an entirely different company and ‘Irv” left train buffs like us a long time ago.”

Anxious to show folks his still-under-construction American Flyer layout, Rick Guercio invites those planning a trip to Cedar City to visit his S-scale railroad.  Reach him by text (713-805-8742) or email (rguercio@aol.com) to arrange.

Larry Schneider’s update on his G-scale empire.  “After many months of track restoration and locomotive conversions, I finally have "Train Control".  I have converted 7 locomotives to operate via Bluetooth, using 2 iPads.  I decided to use one for running trains on the outer loop and another for trains on the inner loop. This provides the opportunity for guest engineers to run trains on my layout. Pictures included HERE (scroll down to the May 2021 Update) show the iPad app and my newest Santa Fe Chief consist, led by an A-B-A F7 lash-up with 6 cars; Baggage, Diner, Dome, Passenger, Dome, and Observation. This is G scale modeling.  I have also been running 5 other loco's 4 LGB (using just motor control) and a UP Steam engine equipped with a sound decoder.  All work great. Future projects are realigning the inner loop track, adding a 3’ by 27’ mural on the back wall, 50’ track on the retaining wall for the trolley and other trains, return of the Campground that no one saw, and who knows what next.”

John Dobbs’ update.  “The layout I was doing in the storage unit was scrapped because I bought a new truck so I downsized the storage unit.  I still have the On30 portable layout.  My new project is a N-scale industrial layout in a bass guitar case.  I have tried this before with okay results and it’s time to try it again.  If you search YouTube for guitar case model railroads, you will find some cool videos.  My layout has a Union Pacific locomotive for the switching.  I'm deciding if I want to use Atlas or Kato track.  The design I currently have will allow for other guitar cases to be bridged together. I'm not sure if I will do that but I thought it would be a neat idea.  This layout is freelance and doesn't have any real time period.  I'm just going to do what l feel looks right for this layout.  I still have more rolling stock to get and maybe a second locomotive.”  Click HERE for photos.

Tom Lantry had some difficulty making JMRI function properly with his Apple computer and decided on an inexpensive PC laptop as a solution.  “I had to switch Windows out of S-mode, which is a security measure to prohibit downloads outside the Microsoft Store.  Then I successfully downloaded JMRI and Java.  Unfortunately, I couldn’t make a DecoderPro connection with the Zephyr DCS52.  As there was no alternate software option, I switched the USB cable from one USB port on the computer to the other, and it worked.  I have since been able to use both ports to connect to Zephyr!  The specs for my specific HP Athlon 14” make no mention of different types of USB ports.  So maybe it was just a resetting issue.  Unplug, wait a minute, plug it back in.  Stray electrons (?).

Subsequently when I ran a loco through the sections the appropriate LEDs did light to show the section was occupied and shut off as the loco exited the section.

I guess the unit needs to calibrate itself to a baseline resistance on the tracks to work properly.

I made the right decision holding off on the layout until I get more experience with operating DCC locos on the test track oval and 2 sidings on a 4x8 sheet.  I’m using sectional code 83 track, wiring is exposed with quick WAGO connectors, and troubleshooting is easy.”

We're in a bit of a bind.  The Thanksgiving Point show will likely be Jan 14-16, 2022.  The Hostler's Show in Ogden will be March 4-6.  As we have spoken with hotels about rates, stuff climbs pretty quickly through the spring. February rates are about $70, by mid-March it's $90, and by April it's $100 (and those are discounted rates). I'm going to explore some more options, but I would expect the general trend to hold.  To that end, we're tentatively considering Feb. 11-12, with a similar schedule to this year's event. That's the weekend we've used in the past. The other possibility is Feb. 25-26.

We're trying not to compete with the other shows in Utah, but it's possible we'll be aligning more towards the St. George/Vegas/SoCal/Northern AZ crowd anyways. And I know not every club and every vendor attends Thanksgiving Point and/or Ogden, so maybe we can aim to attract some of those groups in our direction.

We know that this year's show may have been extraordinarily-well-attended mostly because of COVID cancelling everything else in sight, but I think we have a solid product and we'd like to make it a good tradition, even if its size may be somewhat smaller in the future. Most of our visitors were more "tourists" than "hobbyists" anyways, so I think people will come. It's the vendors and displays I'm mostly concerned about with the schedule.”

Tom Lantry discovered HobbyTown will be moving its operation to a location in St. George.  “Owner told me they no longer carry trains because people were highly specific in what they wanted and they couldn’t possibly carry the variety of models, road names, colors, in inventory.  They recently moved all their Woodland Scenics merchandise to a box for re-shelving.  Then someone came in and bought the whole box. I suspect one of our train guys!  Clerk says they will probably sell WS at new location.

I wonder how many train enthusiasts are among the hordes of people moving into the area. Maybe St. George will one day support a train store.  I was impressed with the two train stores up north. Hobby Stop in Orem, and Train Shoppe in Gardner Village.  Also re-visited the Ely Train Museum on my trip.”

From Werner Balsterholt - Longest Melody Played by a Model Train

New Life for an Old Layout

How Model Trains Are Made

Amtrak Dining Options: Best Food to Eat on the Train

Until June, stay safe and healthy!!