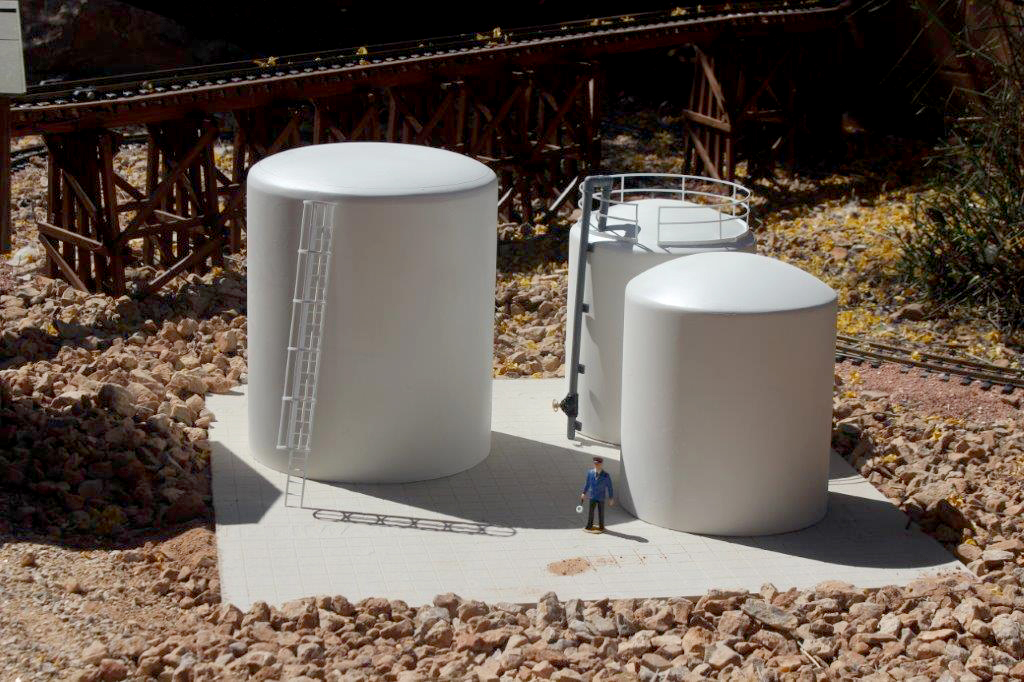 Club members stayed busy in May with railroading and other activities as COVID-19 kept many of us at home.  That said, let’s see what’s new.

Al Thorne continues to mend and is anxious to resume our Friday gatherings when it’s safe to do so.  He wishes everyone well.

Joe Zukowski is home from the hospital and resting comfortably (sort of) after being poked and prodded into a better condition.


Earlier this month, the owners of Duck Creek Village Inn contacted us through Facebook about difficulties with their G scale around-the-ceiling railroad.  To give them a hand, I asked Larry Schneider to see how he could help.  Here’s the description of his diagnosis and repair visit.  “Peggy and I spent a good part of Friday there. Extremely interesting set up. The original owner built the dining room in the early 90's and he was a model train enthusiast so he decided to do the train hanging from the ceiling. He used brass tubing about 1/4 inch for the hangers and then wood cross pieces. Not sure he made these, more likely purchased them from one of the manufactures doing that type of setup. There is about 80-100 ft track with 6ft diameter cures on each end. Not sure of track manufacturer but may have been Aristo. All joints are screwed and after almost 30 years, the track still has good continuity in all sections. It was, however, very dirty as the new owners, Shauna and Ed Mack, had no idea on what to do to maintain the track and the engine. They purchased the place about a year and a half ago and are the third owners. When I got there the train did not move at all.  The two issues were the engine had a big buildup of carbon and dirt on the wheels and of course the track surface was in very bad condition from dirt and gunk in the air. Rolling stock is a Bachmann Big Hauler with tender, 2 passenger cars, flat car, and work car. I also took one of my Bachmann setups along. They also have a track cleaning car but did not know how to use it. I brought some Scotchbrite pads along and we put the track cleaning car behind my engine and got it running and the track clean enough to operate. I reviewed with them how to clean up the wheels on their engine and we did that. Once the track was fairly clean and the engine wheels cleaned up, we put their engine and tender up and it was running. Seems to run for about 10-20 minutes and then the wheels get dirty again as the track really needs a very deep cleaning. I reviewed with them more detailed information about cleaning from using Goo Gone and a light metal sandpaper to better clean the track surfaces. Track power comes from a power pack in the kitchen area. The original owner ran wiring from there into the ceiling and then down the brass hanging tubes and connected to track so you never see there wiring. Very clever.  They also told me they found a small room in an attic area where it appeared, he had what they described as an HO layout but it was all dissembled, they just found pieces of track.  Good and fun time. I gave them all my contact info and directed them to our web site and invited them come see our trains in November.”  Photos of their railroad: https://www.colorcountrytrains.org/p/blog-page_58.html


Speaking of Larry Schneider, he’s added another fossil fuel business.  Here’s how he describes the project.  “Over the past month I have been working on building an Oil Tank Storage Farm. This is entirely scratch-built from parts I have been able to acquire and/or modify. The tanks are large plastic pipe which I cut to a size that feels proportional for G scale. The smaller tanks are 8.5 inches in diameter and 10 inches high and the large tank is 10.5 inches in diameter and 12 inches high.  I was able to purchase the "cage" ladders and top fence and then cut them to size, not yet attached. I built the standpipe from smaller plastic pipe and fittings that I modified to look the proper size as well.  The tops for the small pipes are end caps that I cut the dome out of and fitted it to the top and the large tank has a wood top that was turned on a lathe from a 2x12 and then fitted and painted.  Additionally, there will be a Chain Link fence around the perimeter once the scene is completed.  Signage will also be added to the tanks.  Also, the coal mine got an official sign added to finish it off.  Next project will be a 1930-40 era oil drilling rig.”  https://www.colorcountrytrains.org/p/blog-page_15.html

Bruce Klawitter sure likes puzzles and he builds them quickly too.  He’s certainly giving Jim Clark a serious run for his money!!  Puzzle titles include “Coca Cola All Aboard”, “Country Crossing Pheasants”, “Gassing Up”, “Mountain Cabin”, “Peace Like a River”, “Seek and Find Train Station”, “The Toy Store”, “Weekend Retreat”, and “Wilderness Trip”.  https://www.colorcountrytrains.org/p/bruce-klawitter-puzzles.html

Bryan Enarson finished up his project from last month’s update.  Click here and scroll down to see photos.  https://www.colorcountrytrains.org/p/bryan-enarson-update.html

Folks visiting Bryan’s “man cave” last November might recall seeing Linda Enarson’s American Flyer railroad she was given as a Christmas present in 1958.  Click the link for photos.  https://www.colorcountrytrains.org/p/linda-enarson-american-flyer.html

Speaking of American Flyer, Rick Guercio sold his home in Washington and moved to Cedar City. With disassembly help from Dave Merrill, his    S scale railroad is packed up in boxes.  He tells us his new house has “an unfinished basement so if I ever get the energy up again and don’t feel too old for it, I have a spot to try and put my trains up again.  Good luck to everybody and thanks again Dave.”

Werner Balsterholt added vehicles and figures to his N scale layout.  Click the link and scroll down the page to see the additions.  https://www.colorcountrytrains.org/2019/01/n-scale-railroad-gets-new-home-part-3.html

Ron Smith (our newest G scale modeler) introduces himself.  “I'm a Sunriver resident who belongs to the "Sunriver Junction" RR club.  For the past year, I've had two O-scale layouts.   Now I've decided to step up to G-scale.  Via Larry Schneider, I'll also put in my 25 dollars and formally join Color Country Model Railroad Club.   Thank you for putting me on your list.  My track G-scale track layout is about 200 feet with two Piko trains.  One is their new battery powerful 25-ton Diesel, and the other is a track powered Reading Railroad steam engine.   That makes me think of Monopoly's ‘Take a ride on the Reading railroad.’  I still have a long way to go with adding buildings, cars, and other accessories.  My landscaping, though, is nearly done.  Strange as this may seem, I was able to integrate my fascination for WW2 aircraft into the layout.  Piko now sells "warbird gondola cars," one of them being the P-51.   You'll see a 1/24th scale P-51 is an outdoor museum piece in my town.  All of this is so much fun.”  Here are photos of his progress.  https://www.colorcountrytrains.org/p/ron-smith-g-scale-outdoors.html

Our long-distance friend Doug Whetstone continues his layout building.  Here’s his update.  For photos, see his blog.  “From Doug Whetstone.  Greetings to all my friends in Saint George (and those of you I haven’t had a chance to meet). Since this virus crap hit, like you, our lunch group stopped meeting and I sure miss it. I’ve been busy installing insulation in the basement where the train room will be built and replaced the 40-year-old windows to help control the climate (drywall will come next).  Also spent some time cleaning off the workbench which makes finding the needed implements of construction a little easier.  As to modeling, a cement manufacturing site is needed for the layout so I built Faller 130474, Cement Works kit and weathered it.  With still time on my hands, I started building the Korber 104, 3 Stall Roundhouse, a kit that I have probably had for 20 years and have no idea how old it was when I bought it at a train show. I was not familiar with the material the walls were made from but they were bowed and when I tried to flex one of the side walls a bit to see if it would bend back to straight – SNAP – it broke in half. I tried heating the other side wall and weighting it down, but that didn’t work either, so I decided to try my hand at scratch building. John Scherr, a narrow-gauge friend here in Jefferson City, used his CAD program to draw templates of the building parts for me to use in the construction. So far, I have built all the walls from .080 styrene and am waiting on some textured brick sheets to arrive to give the model a brick appearance when it is done. Here are some photos of my work so far with a quick mock-up to make sure the locomotives will fit.  After placing several steam locomotives within the walls, I discovered that the center stall expansion I added to the rear of the stall was not enough to accommodate a big boy and tender, so I had to build another expansion increasing the length by another 2 inches. Hopefully my brick will arrive shortly and I can press on with construction.  That about wraps it up for some of what’s been going on within the CMA community of modelers. The quarantine may have kept us indoors for the better part of this quarter, but it hasn’t kept us from our railroads. That’s it. Hope everyone is staying safe and well. I really enjoy what Lloyd is doing as far as the newsletter. It helps to keep me in touch with you guys. See you next quarter. In the meantime, . . . keep your hand on the throttle and your eyes on the rail.”  Keep up with Doug’s progress on his blog:  https://dougstrainroom.blogspot.com/2020/05/9-still-quarantined-but-making-progress.html

And lastly, I gathered dirt from outside Cedar City for use in my engine terminal.  Now that’s exciting.  😉

As NMRA members of this club already know, the 2020 convention slated for St. Louis was canceled.  However, since April, NMRA clinics from around the world are now being hosted on Facebook and YouTube.  (You don’t have to be a Facebook user to watch.)  The next scheduled events are June 13 and June 27.   See the NMRA Facebook page: https://www.facebook.com/pg/NMRA.org/events/?ref=page_internal and YouTube (for previous events) https://www.youtube.com/results?search_query=nmra-x

Until July,
All Aboard !!