Railfanning in the Great Northwest

Here are photos and descriptions from Thomas and Irene Eckhardt's trip to Oregon and Washington earlier this year.  Talk about being patient !!


UP Heritage Unit -- At Last
After UP heritage units evaded me for several years (admittedly no intensive rail fanning), I was finally able to get some decent shots of the DRG&W unit 1989 coming back from Seattle.  We just finished buying food in Pendleton when I spotted the unit through the bushes at the point of a west bound double-stacker.  As it seemed to be moving slowly, a chance to catch up some place decent, but where?  Never rail fanned that part of the La Grande sub before.  Well there is an I-84 exit west of town, just after crossing the UP mainline that follows the Umatilla Valley, whereas I-84 climbs up to a plateau to follow a more direct route west. After some waiting it was obvious that the train had stopped, and I decided to go to the west end of the Pendleton siding to check the signals.  Both were red.  Maybe a meet, I went to the other side, signal also red.  What the heck was going on?  After some waiting and no train, it was time to pack up and return to the I-84 interstate, as the sun was already pretty low.  Just as we crossed the tracks the head light of the west bound showed up.  Finally, I got some decent shots. By the way the branch line veering at this point and crossing the river on that nice bridge is leading to Pilot Rock OR, a major Cascade Wood manufacturing site. 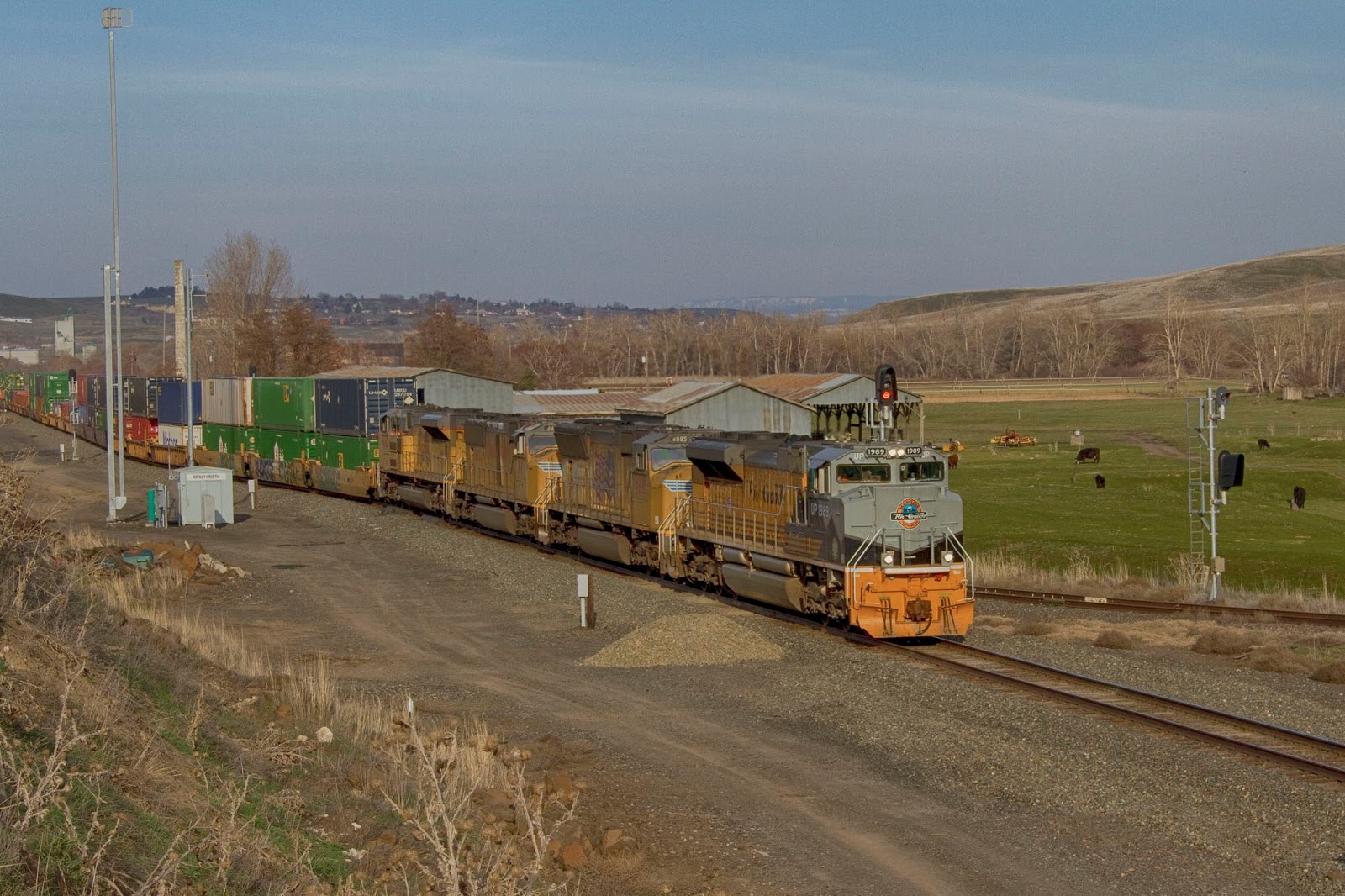 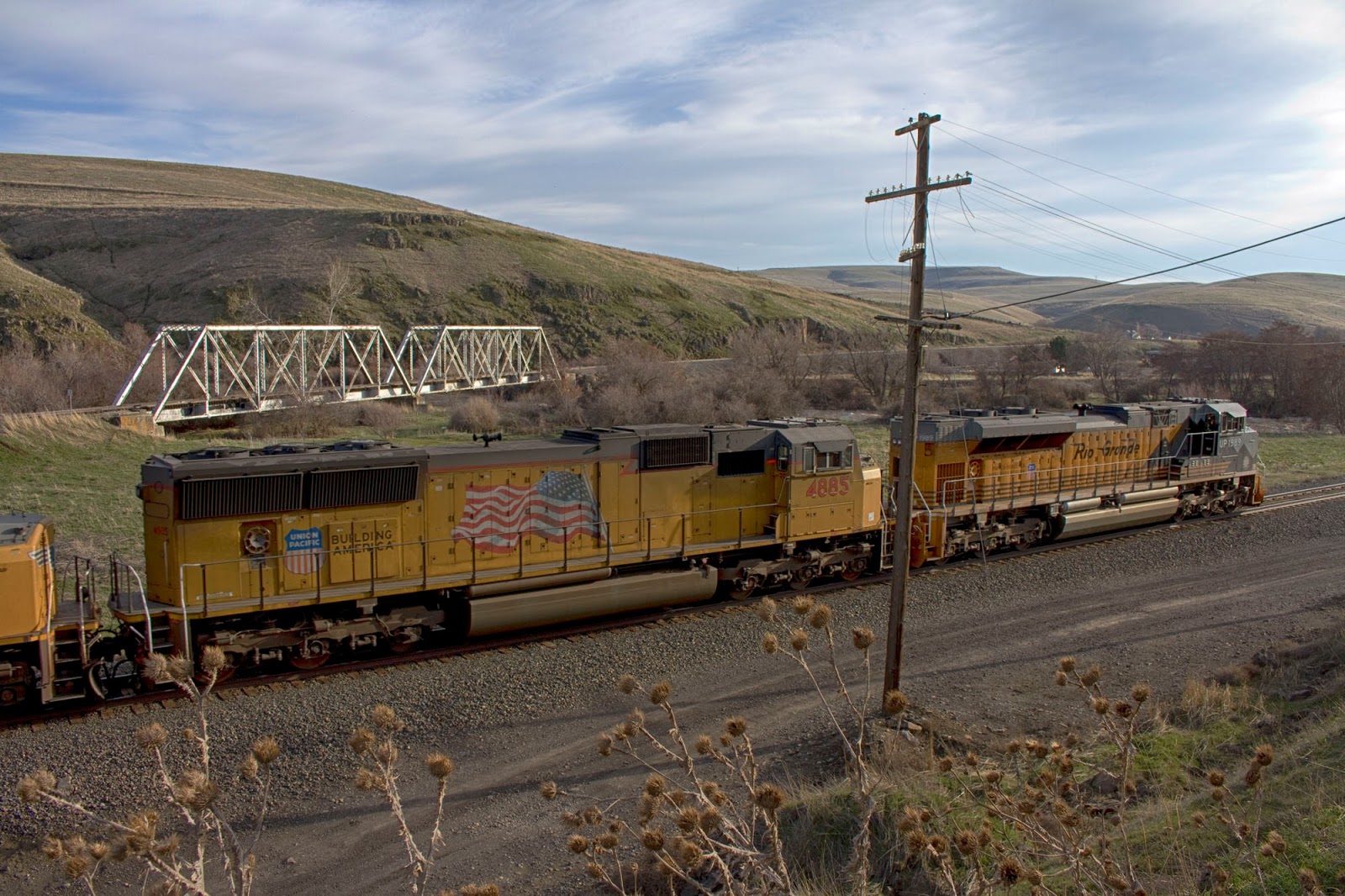 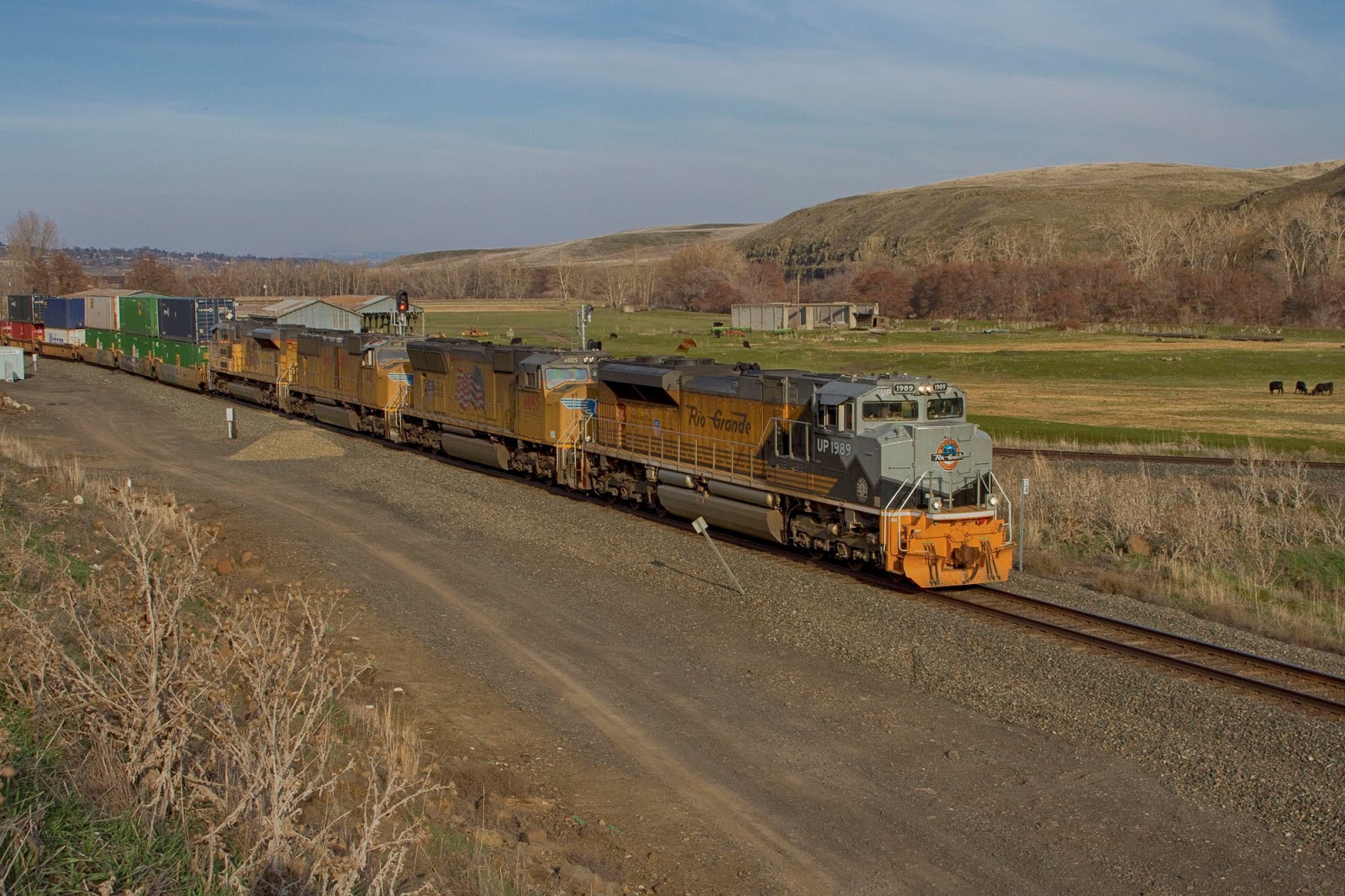 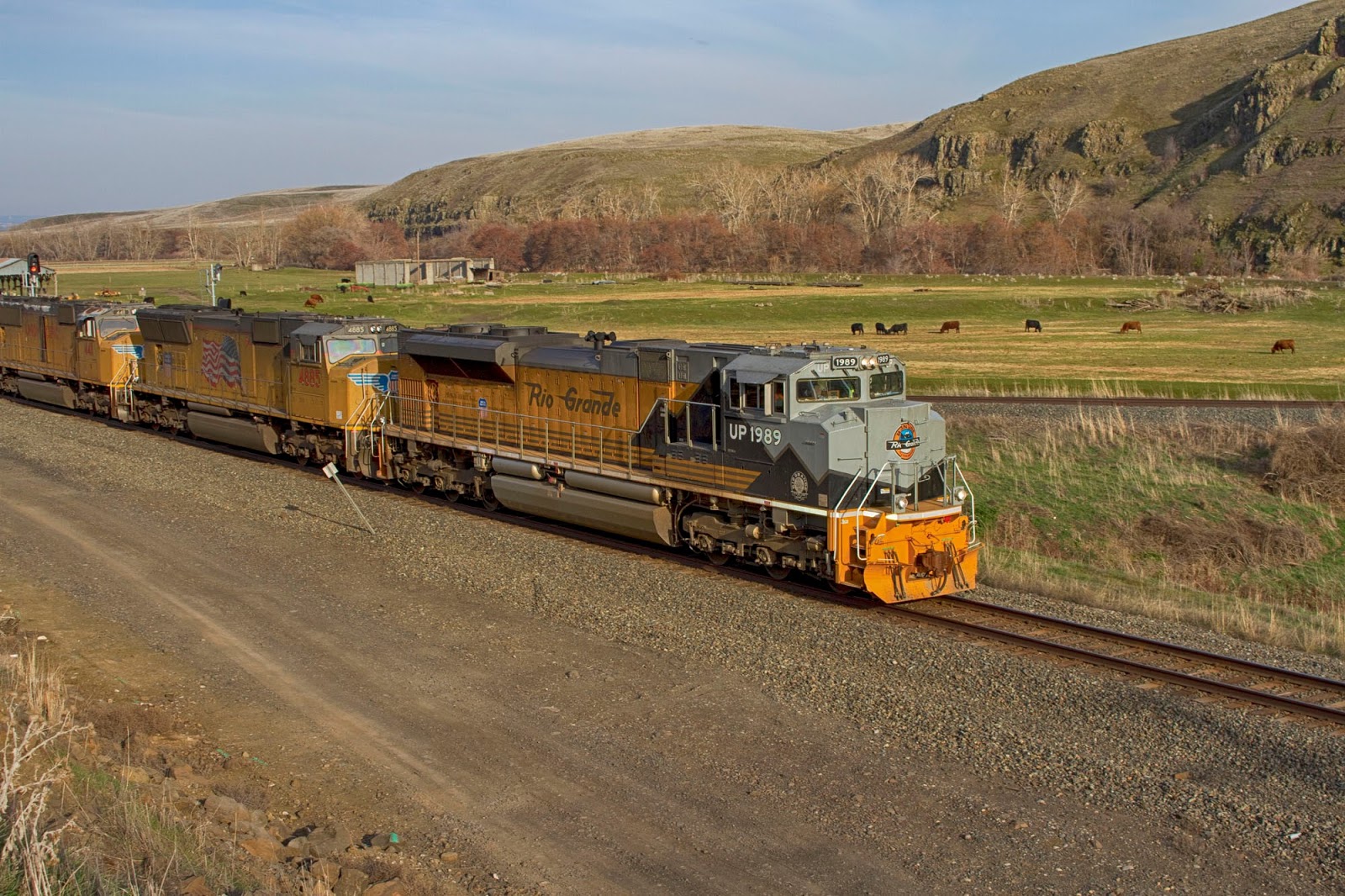 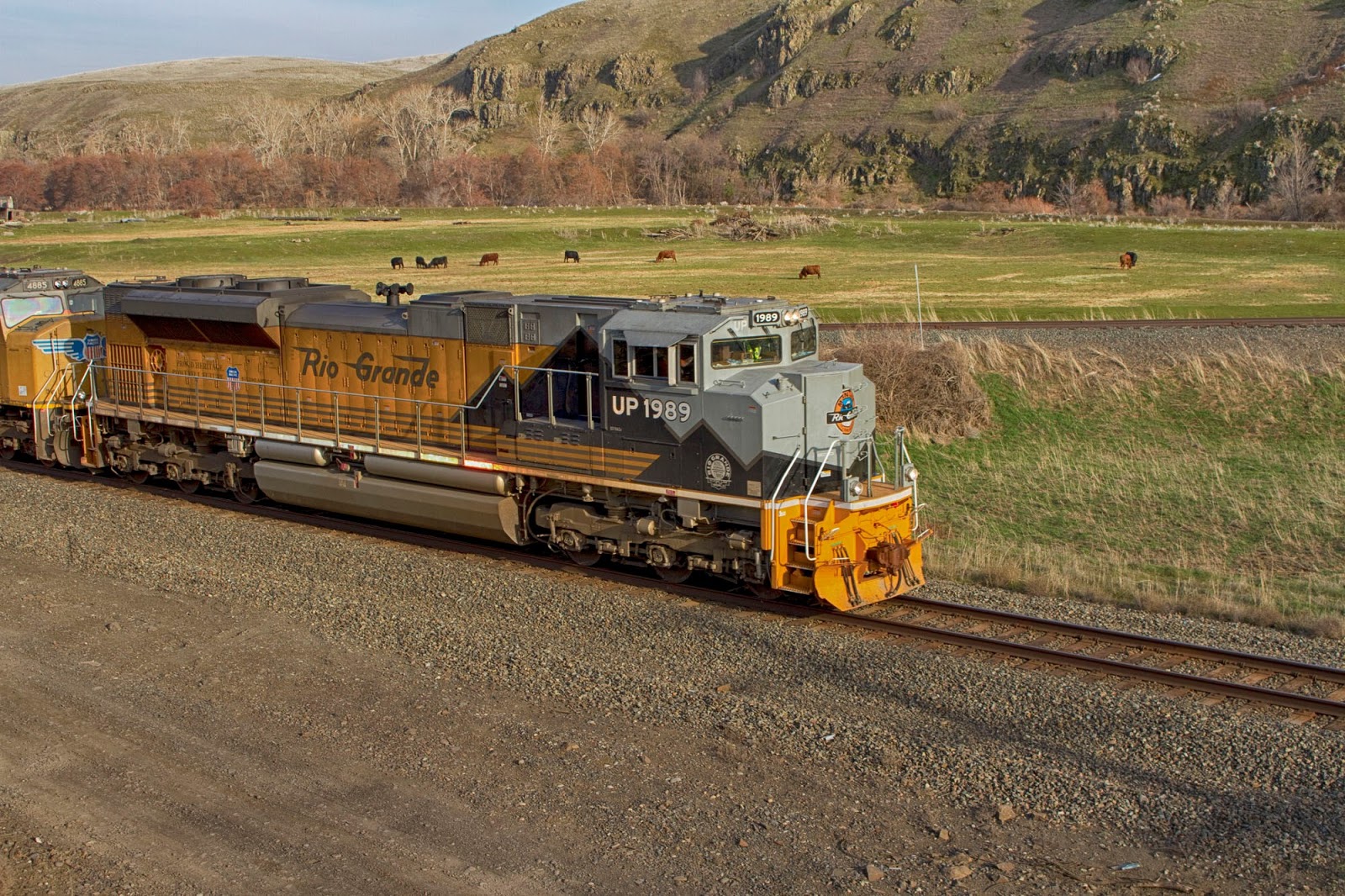 We decided to chase the train on old highway 30 that parallels the UP line through the winding Umatilla valley. For some time things were looking promising, but once the entire train cleared the siding, its speed was up to 50mph in no time, no way to keep up on a road that had not seen maintenance for several decades and was littered at places with rocks fallen from the cliffs.  After about 10 miles the train seemed to slow down and eventually came to a stop, unfortunately on the far side of the valley.  There was an east bound merchandiser waiting in the siding, but for some reason the west bound stopped before the siding.  We waited at a nice spot, but no sign of a train, looks like there were some signal problems!

Well at least one decent series of pictures!

Thomas also shared this YouTube video of a BNSF Boeing local making a reverse movement up the steep grade from Mukilteo on the way to Boeing's Everett, Washington plant.  Note the odd-sized containers.  https://youtu.be/AlkQHM90_qA